It’s one of the oldest and most popular events on the road cycling calendar – the 103rd Giro d’Italia is here, with the world’s best riders taking to the streets and hills of Italy. Read on for our full guide to getting a 2020 Giro d’Italia live stream and watch all the cycling action online, no matter where you are in the world – see if there’s FREE coverage in your country. 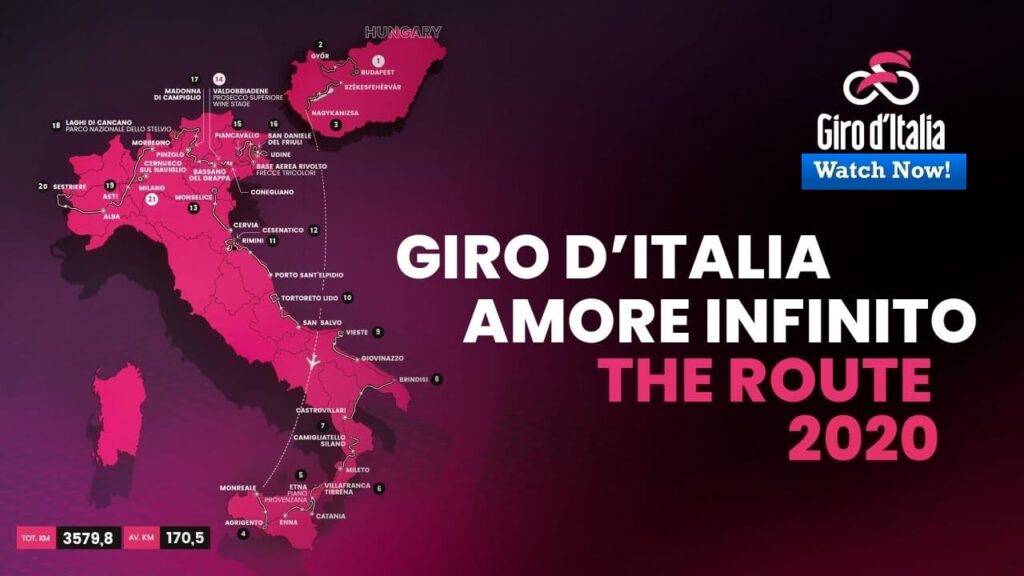 Postponed from its regular May slot, this year’s race had initially been set to feature a stage in Budapest, Hungary, but due to the pandemic and the reshuffling of the UCI calendar, this year’s event will now be an all-Italian affair. The rejigged 3,497.9km route takes place over 21 stages with 23 teams set to feature.

The action runs from Saturday, 3 October in Monreale in Sicily and concludes on Sunday, 25 October in Milan across 21 gruelling stages in all. There are great ways to watch from all over the world – including FREE options in some regions. See below for more details.

Start times vary from stage to stage, but you can generally expect the action to get going between midday and 1pm local time (so look to tune in at 11am BST, 6am ET, 3am PT, 9pm AEDT).

Arguably the most picturesque event in the UCI calendar, the race boasts once of the most dramatic climbs there is with stage three’s mountain-top finish at Mount Etna.

The race schedule includes three grinding mountain stages and three individual time trials, which kick off with stage one’s most downhill 15.1km route in Sicily and concludes with stage 21’s dramatic 15.7km run in to Milan.

Geraint Thomas will be looking to make a point to Ineos Grenadiers after he was left out of their Tour de France squad. The Welsh ace will be supported by fellow Brits Tao Geoghegan Hart and Ben Swift in the eight-man Ineos squad, which also includes new world time trial champion Filippo Ganna. However, last year’s champ Richard Carapaz won’t be involved having instead focussed on the Tour de France.

Thomas will face competition from Simon Yates of Michelton-Scott, who finished third at the Tour de Pologne and Vincenzo Nibali will be many pundit’s bet, following the Trek-Segafredo star’s second place finish in last’s year’s Giro.

Read on to find out as we tell you the best options to live stream the Giro d’Italia. And the best bit is it’s possible to do so absolutely free from some locations.

Possibly the most picturesque event in the UCI calendar, the world’s elite riders are on the road for the Giro d’Italia 2020 – one of the most iconic cycling events of the year – read on to find out how to get a live stream, matter where you are in the world.

Taking place five months later than normal thanks to the Coronavirus epidemic, putting it after both the Tour de France and Road World Championships, original plans to feature a stage in Budapest, Hungary have been scrapped with the race now solely taking place across Italy.

The revised route takes place over 3,497.9km and 21 stages including a dramatic mountain-top finish at Mount Etna for stage three.

Of the top 10 finishers in last year’s race, only five are at the Giro this year, with 2019 champ Richard Carapaz not involved having instead focussed on last month’s Tour de France.

Carapaz’s appearance in the Tour De France resulted in his team mate Geraint Thomas being edged out of a place in Ineos Grenadiers’ squad for that race, and the Welsh star will be desperate to prove a point to selectors here.

The Welsh star, who hasn’t appeared in the Giro since suffering a nasty crash in 2017 that ultimately lead to him bowing out mid-way through, heads up a team this time out that also includes fellow Brits Tao Geoghegan Hart and Ben Swift

Jumbo-Visma’s Dutch rider Steven Kruijswijk is also well-fancied and will also be looking to banish some bad memories of his own this time out, having had a seemingly unassailable lead back in 2016, only to suffer a horror crash at stage 19 and finish a devastating fourth.

Who will win this year? Read on to find out how to watch the Giro d’Italia 2020, no matter where you are in the world.

Taking place across 21 stages, the Giro d’Italia 2020 takes place between 3 to 25 October.

Start times vary from stage to stage, but action on most days gets underway between midday and 1pm local time (so look to tune in at 11am BST, 6am ET, 3am PT, 9pm AEDT).

Watch the Giro d’Italia 2020 online from outside your country

We have details of all the US, UK, Australian and Canadian broadcasters of this iconic cycling event further down in this guide. If you’re intent on watching the Giro d’Italia 2020, but find yourself away from home then you’ll run into problems when trying to stream your domestic coverage online from abroad as it’s likely to be geo-blocked.

That’s where a VPN (Virtual Private Network) can be a lifesaver. They allow you to virtually change the ISP of your laptop, tablet or mobile to one that’s back in your home country, letting you watch as if you were back there.

VPN’s are incredibly easy to use and have the added benefit of giving you a further layer of security when surfing the web. There are lots of options, and we recommend ExpressVPN as our #1 pick due to its speed, security and ease of use. It can be used on a vast array of operating systems and devices (e.g. iOS, Android, Smart TVs, Fire TV Stick, Roku, games consoles, etc). Sign up for ExpressVPN now now and enjoy a 49% discount and 3 months FREE with an annual subscription. Or give it a try with its 30-day money back guarantee. Looking for other options? Here are some alternatives that are on sale right now.

No matter where in the world you may be, a VPN is one of the easiest ways to watch the Giro d’Italia 2020. Get in on this deal now!

If you’re in the States and looking to watch the action from Italy, the Giro d’Italia 2020 can be accessed via a FuboTV Cycling Pass. The sports focused streaming TV solution lets you subscribe to watch cycling for $59.99 for the rest of the 2020 season and the service can be accessed via smartphones, tablets, Smart TVs and streaming boxes.

Cycling speciality streaming service FloBikes is also offering live coverage of this iconic race. A subscription to FloBikes will set you back $30 per month or $150 for the year, and gives you access to most of the cycling season’s biggest races.

Fubo TV offers access to just about every single NFL game that will take place during the 2020-2021 NFL season. If you don’t want to miss out on any kick off or touchdown that takes place, you will want to sign up for the service now.

Eurosport has exclusive live coverage of the Giro d’Italia 2020 in the UK, with Eurosport 1 the channel to head to via Sky, BT TV or Virgin Media. If you’re looking to watch the race on a laptop or mobile device, you’ll need to grab the standalone Eurosport Player twitch costs £6.99 a month or £39.99 for the whole year.

How to stream the Giro d’Italia 2020 live in Canada

Like the US, Canadians can watch all the action from Italy via streaming service FloBikes. A monthly subscription will cost you $30 while a yearly account will set you back $150 ($12.50 per month), which will give you access to coverage of major cycling events throughout the year.

Cycling fans Down Under can tune into live coverage of the The Giro d’Italia 2020 via Eurosport.

The channel is available to Foxtel subscribers. An HD package that includes sports, drama and entertainment costs AU$58 per month for a one year contract.

We may earn a commission for purchases using our links. Learn more.

The postponed Giro d’Italia gets underway in Monreale on October 3 with a 15.1km individual time trial, having moved from its normal May time slot to the autumn because of the coronavirus pandemic.

Rather than start in Budapest, as originally planned, the Giro d’Italia will start with four days in Sicily – site of the start of the 2021 race – before reaching the mainland on stage 5 and the race then winds its way northwards and into the high mountains.

The Giro d’Italia starts in Palermo on Saturday October 3 with a mostly downhill 15.1km time trial from the hill-top village of Monreale and finishes in Milan on Sunday October 25 with a 15.7km time trial to the spectacular Duomo.

As well as featuring three individual time trials that total almost 70km in distance, the Giro d’Italia will include a series of high-altitude mountain passes in its third week. The penultimate stage will bring the gruppo from Alba to Sestriere by way of the mighty Colle dell’Agnello, Col d’Izoard and Col de Montgenèvre.

To balance out the amount of time trial kilometers the race organisers RCS have also including a whopping 40,000 meters of climbing across 50 classified climbs and five summit finishes. That amount of climbing in the mountains will ensure that the Giro d’Italia is a close-fought race, with pre-race favorite Geraint Thomas facing stiff opposition from the climbers.

The 2019 Giro was won by Richard Carapaz, who seized the maglia rosa after claiming stage victory at Courmayeur. The Ecuadorian rode with assurance in the final week to repel the challenges of Vincenzo Nibali and Primoz Roglic, and he was feted as the Giro champion in the Arena in Verona.  Carapaz will not return to defend his crown in 2020 having raced the Tour de France earlier this year.

Vincenzo Nibali will return to the Giro d’Italia in 2020 in the colours of his new team Trek-Segafredo, while Peter Sagan will make his Giro d’Italia debut. Geraint Thomas (Ineos Grenadiers), having been omitted from his team’s squad for the Tour de France, will start as one of the overall favourites but he will have to take on the likes of Nibali, Jacob Fuglsang (Astana), and Simon Yates (Mitchelton-Scott) to win the coveted maglia rosa.

Yates won three stages in 2018 and wore the maglia rosa until he cracked with just a handful of stages remaining. This time around he has said that he has learned from his mistakes, and he certainly looked in form in September, when he won Tirreno-Adriatico, ahead of Geraint Thomas.

Other potential GC contenders for the overall include Steven Kruijswijk (Jumbo-Visma) and Rafal Majka (Bora-Hansgrohe) but the Giro d’Italia almost always throws up a few surprises in the race for the maglia rosa and even though Remco Evenepoel is missing through injury, there are a number of young riders making their debuts who are worth watching over the three-week Italian Grand Tour.

Kruijswijk also missed the Tour de France through injury but the Dutch  rider came close to winning the Giro d’Italia back in 2016 and this year’s route certainty suits him. Majka has a strong Bora-hansgrohe team around him and is riding for a new contract for next year, so should be highly motivated to perform.

The race has a number of high-profile sprinters on the start list, despite news that Caleb Ewan would no longer be at the race. Fernando Gaviria (UAE Team Emirates) leads  the line but the Colombian fast man will face stiff competition from Arnaud Demare (Groupama FDJ), Elia Viviani (Cofidis), Peter Sagan (Bora-hansgrohe), and Alvaro Hodeg (Deceuninck – Quick Step). Michael Matthews (Team Sunweb) is also on the start list and will be targeting stage wins before his move to Mitchelton-Scott in 2020.